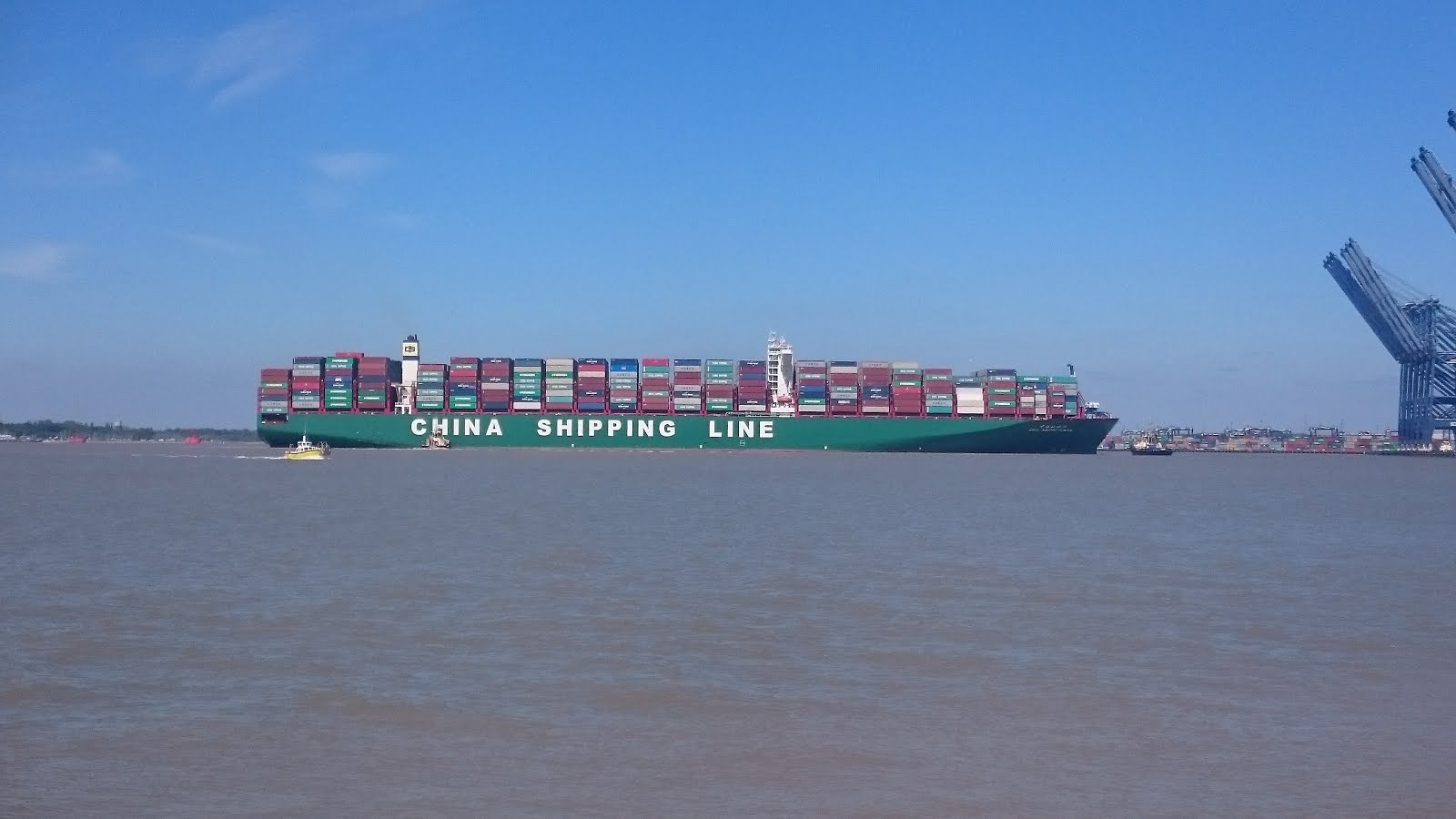 The Maersk Guayaquil departs Felixstowe bound for Hamburg.  Two Svitzer tugs, Svitzer Deben and Svitzer Sky, assist with a pull off the berth. Once the pilot had began to run the main engine ahead, the forward tug was released and stood down.   The pilot held the aft tug a little while longer so he knew the ship would steer ok then when he was happy the aft tug was released. The Deben follows the Maersk Guayaquil out of the harbour as the next job Maersk Geneva was closing in on Felixstowe.

The day kicked off with some ultra large movements. Just before the next large movement, 2 smaller vessels Oocl Kobe and Maersk Kawasaki both departed Felixstowe's Trinity Terminal.  The first was OOCL Kobe which was helped away from the berth by Svitzer Deben. Once the mooring gangs and Svitzer Deben had finished with the Kobe, they went to station with the Maersk Kawasaki.

Cosco Shipping Denali built in June 2018 makes her European debut by making the Port of Felixstowe her first European port.  At 366 metres in length and 51.2 metres in breadth she can hold just over 14,500teu.  She began her voyage in China before going to Singapore and then through the Suez Canal northbound to Felixstowe.

One of Harwich Haven pilots boards the Denali at the Sunk Pilot Station which is around 12 miles out in the North Sea from Felixstowe.

Once onboard the pilot radios Harwich VTS to say they were inbound 13.9 metre draught from Singapore, planned port side to Felixstowe Berth 9. VTS replies with the wind on the Landguard, height of tide and any conflicting traffic.  After a few moments the pilot requests three tugs for berthing. Two outside, first made fast centre lead aft before the Platter, second starboard quarter then make fast on the main deck but on the quarter and the third inside the harbour to make fast starboard shoulder for a port swing off the berth.

Svitzer Kent heads out to be the first tug and makes fast centre lead aft. Shortly after Kent heading out, Svitzer Shotley leaves the tug pontoon to be the quarter tug. The skipper on the Shotley radios the pilot to say they can make fast whenever the crew are ready as the panama lead was right above the tug marker.  Finally Svitzer Deben slowly heads to the entrance of the harbour to wait for the Cosco Shipping Denali to round the Beach End before making their approach to make fast on the starboard shoulder.

Safely inside the harbour, the pilot uses the Kent as a brake to slow the ship down ready for the swing. To slow down a bit more the pilo runs the main engine astern.

Almost swung around the Shotley comes in to push her alongside Felixstowe Berth 9. Kent helps straighten her for a parallel berthing onto the fenders.

Final tie 6 and 2 with springs first fore and aft then offshore lines.
Posted by Unknown at 14:34 No comments:

MSC Tina is currently one of MSC's largest ships in their fleet able to carry an impressive 19,437teu.

Felixstowe was about to experience one of their busiest days for ultra large movements for a good couple of weeks.

The day started off with the MSC Sarah arriving for Trinity 7 just before 6am. Soon after, the MSC Tina was ready to depart for her next port of Le Havre. When she was off the berth, the ferries departed for their various parts of Rotterdam,  then a Harwich Haven pilot boards maiden voyage Cosco Shipping Denali at the sunk to go port side to Felixstowe Berth 9 from Singapore. When she was making fast alongside, 2 pilots came across from Harwich to board OOCL Kobe and Maersk Kawasaki. Tugs from the Kawasaki then went to assist the heavily laden CSCL Indian Ocean off the berth for her next port of Singapore. And the last big ship of the day was the Marseille Maersk from her last port of Colombo.


MSC Tina ready to depart from Felixstowe Berth 9 with the assistance of Svitzer Kent made fast centre lead aft and Svitzer Shotley on the starboard quarter.  Once the lines fore and aft were released the pilot uses the tugs to reverse her off the berth before using the bow thrusters to bring the bow around into the tide.

Safely inside the channel, Shotley is released and makes their way around to the port quarter for a push indirect.   Kent aft drops in astern and prepares themselves to assist steering around the 90° Beach End turn out of the harbour with a powered indirect.
Posted by Unknown at 01:53 No comments:

The tide restricted Maersk Edmonton departs Felixstowe Berth 7 for her next port of Le Havre in France.

A Harwich Haven pilot boards the ship for the outward journey to the Sunk where the pilot disembarks onto a pilot launch.

The plan was a simple pull off the berth then release the forward tug when the ship has some headway. The pilot keeps the Shotley fast until they were safely around the 90° Beach End turn at the entrance of the harbour.
Posted by Unknown at 12:37 No comments: